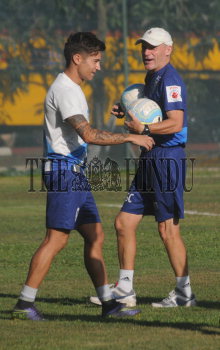 Caption : KOCHI, KERALA, 08/10/2016: The Kerala Blasters coach Steve Coppell has a word with one of his key men, Spaniard Josu Currais Prieto, during a training session in Kochi on October 08, 2016, ahead of Sunday's Indian Super League football match against Delhi Dynamos. Photo: Thulasi Kakkat