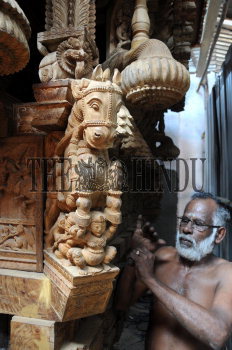 Caption : PALAKKAD, KERALA, 06/10/2016: An artisan gives the finishing touches to the car chariot that will be used for the Kalpathy festival at Palakkad on October 06, 2016. The famed Kalpathy Ratholsavam , which will be held at November second week this year, has been sanctioned Rs 10 lakh by the Tourism department and the repair work will be completed before the Vellottam festival, which is a trial run of the annual car festival. “Kalpathy Ratholsavam was the biggest festival of Malabar in the erstwhile Madras presidency. The Viswanatha Swamy temple is popularly known as Kasi Viswanatha Swamy temple. It is believed that the deity was brought from the holy Ganges at Varanasi, and sage Bana had worshipped the deity in this temple. A stone inscription in front of the temple proclaims that it was built in the Malayalam year 600 (AD 1425) by Sri Itti Kombi Achan, the then Raja of Palakkad. Though the festival is based on the Vedic Tamil Brahmin culture, equal rights are also given to other communities,” says Kerala Brahmana Sabha president Karimpuzha Raman, a resident of Kalpathy. Photo: K. K. Mustafah