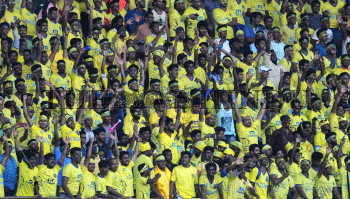 Caption : KOCHI, KERALA, 05/10/2016: Football fans who came to witness the Indian Super League (ISL) football match between Kerala Blasters FC and Atletico de Kolkata at Nehru Stadium in Kochi on October 05, 2016. The tournament has been witnessing a great response here with people of all age groups flocking the city to witness the matches. Photo: H. Vibhu