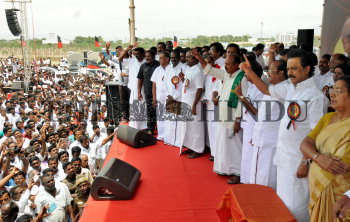 Caption : COIMBATORE, TAMIL NADU, 03/09/2016: Dravida Munnetra Kazhagam treasurer M.K. Stalin participating in a demonstration organised by the party in Coimbatore on September 03, 2016, to protest against the State Government for its failure to take action against the Kerala Government's proposal to construct a dam across the Siruvani at Attappady. Photo: M. Periasamy