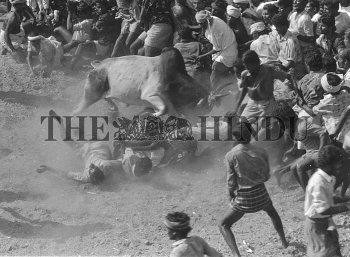 Caption : A scene from 'jallikattu' also know as 'manchu virattu' in Madurai, a town in the southern Indian State of Tamil Nadu. Also known as 'yeru thazhuvudal' (yeru - bull; thazhuvudal - literally, to hug), it is the Indian version of the Mexican bull fight. According to the ancient literature, the Tamil people considered love and valour as great virtues. Literature bears much proof about the popularity of this sport. The chivalrous youth who could contain a charging bull was much preferred by the ladies when it came to marriage to one who could not.