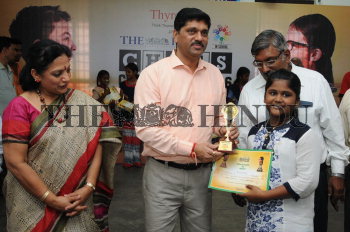 Caption : MADURAI, TAMIL NADU, 23/08/2016: A. Ahalya of TVS Matriculation School, Madurai, who won the first prize in junior girls category in The Hindu in School edition chess tournament, poses after receiving the trophy and certificate from the Commissioner and Inspector General of Police, Shailesh Kumar Yadav, at a colourful prize distribution function held at Adhyapana School campus in Madurai on August 21, 2016. Photo: G. Moorthy