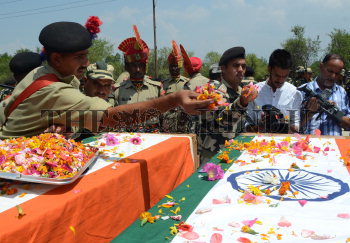 Caption : SRINAGAR, JAMMU AND KASHMIR, 09/08/2016: A Border Security force officer pay tributes to Border Security Forces (BSF) men during a ceremony in Humhama on the outskirts of Srinagar on August 09, 2016. Three jawans of the Border Security Force (BSF) were killed in a surprise attack by militants in Kupwara district of north Kashmir on Monday. The attack was followed by an hour-long ceasefire violation by Pakistani troops. One militant was killed in the retaliatory fire. Photo: Nissar Ahmad