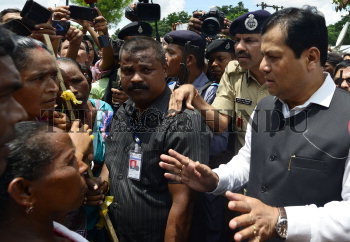 Caption : KOKRAJHAR, ASSAM, 07/08/2016: Assam Chief Minister Sarbananda Sonowal (R) talking to the victims family members while visiting the militant attack site in Balajan market in Kokrajhar district of Assam on August 07, 2016. Three militants of the anti-talk faction of the National Democratic Front of Bodoland (NDFB) Songbijit group triggered grenade blast and opened fire killing 14 civilians and injured 20 others in the Balajan weekly market on 05 August 2016. A militant was also gun down by the army on the spot. Photo: Ritu Raj Konwar