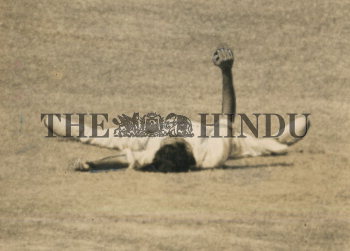 Caption : Phadkar, making a spectacular catch to dismiss SPOONER, who scored 66 runs. The batsman SPOONER up the ball to cover mistiming a drive and Phadkar flinging himself sideways held on to the ball with one hand up in spite of falling on the ground and rolling over, on the opening day of the Fifth Cricket Test match between India and M.C.C. at Madras Cricket Club (M.C.C.) Ground, Chepauk, Madras on February 06, 1952. (Published in The Hindu on February 08, 1952) PHOTO: THE HINDU ARCHIVES