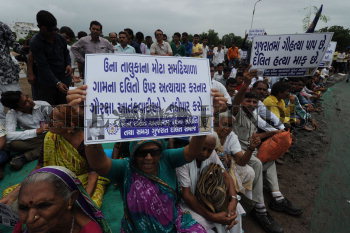 Caption : AHMEDABAD, GUJARAT, 31/07/2016: Dalit women hold a banners as Gujarat Dalit Community gather in large numbers to protest against atrocities on Una Dalit victimes in Ahmedabad on July 31, 2016. Dalit community protesting after four men belonging to the Dalit community were beaten while trying to skin a dead cow in Una town in Gujarat on July 11, 2016. Photo: Vijay Soneji