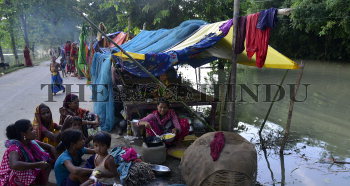 Caption : MORIGAON, ASSAM, 29/07/2016: Flood affected villagers take shelter in relief camps in the flood affected Morigaon district of Assam on July 29, 2016. According to media reports twelve people have died so far and more than 1.6milion people of 19 districts in Assam state have been affected by the current wave of floods. Photo: Ritu Raj Konwar