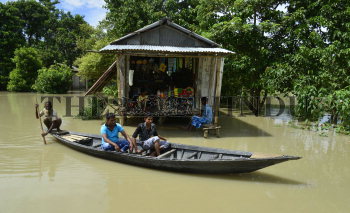 Caption : MORIGAON, ASSAM, 27/07/2016: A man kept his shop open as his village is submerged by in the flood affected Morigaon district of Assam on July 27, 2016. Around 10 lakh people of 15 districts in Assam state have been affected by the current wave of floods. According to the media reports more than 100 relief camps have been set up in the affected districts to provide shelter to the flood affected people. Photo: Ritu Raj Konwar