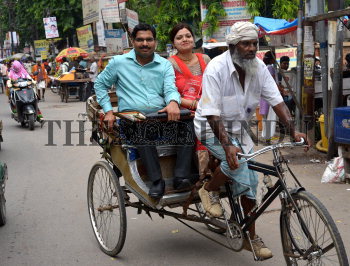 Caption : LUCKNOW, UTTAR PRADESH, 23/07/2016: SCIENTIST RIDES RICKSHAW: Dr. Sudhakar Srivastava of Institute of Environment and Sustainable Development (IESD), BHU who received Young Scientist Awards for 2013-14 from UP Chief Minister Akhilesh Yadav, riding in rickshaw to reach station in Lucknow on July 23, 2016. Dr. Srivastava is working on problems of high level of Arsenic contamination , a heavy metal which is natural pollutant and toxin in ground water, causing and spreading cancer in Gangetic Zone. How rice, Indian mustard and other equatic plants are responding to Arsenic stress which is in groundwater. His finding shows that Arsenic can be restricted in the grains utilizing fertilizer amendment. He is researching at Nadia district of West Bengal which has got the maximum Arsenic content. Scientists at the Patna-based Mahavir Cancer Sansthan (MCS) said in their latest research study that arsenic had been found in tissues of patients suffering from cancer. The source of the offending chemical element was drinking water.They concluded that the probability of two types of cancer (skin and gall bladder) was due to ingestion of drinking water in which arsenic presence was more than 300 parts per billion (ppb). Arsenic contamination of the groundwater in Bangladesh was a serious problem. Prior to the 1970s, Bangladesh had one of the highest infant mortality rates in the world. A 2007 study found that over 137 million people in more than 70 countries are probably affected by arsenic poisoning of drinking water. Arsenic contamination of ground water is found in many countries throughout the world, including the USA. Photo: Rajeev Bhatt