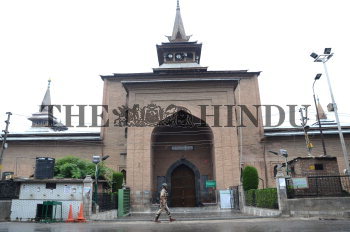 Caption : SRINAGAR, JAMMU AND KASHMIR, 15/07/2016: Security personnel patrol outside a historical Jamia Masjid during a curfew in Srinagar on July 15, 2016. The authorities imposed curfew and severe restrictions in most parts of Kashmir valley for the seventh consecutive day to contain protests following the killing of militant commander Burhan Muzaffar Wani. According to local news reports the death toll reached 32 and over 1,300 persons were injured across Kashmir during clashes over the past six days. Photo: Nissar Ahmad