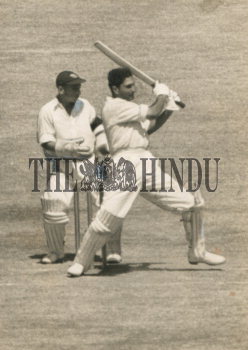 Caption : Polly Umrigar, Bombay and Indian cricket all-rounder , who scored a brilliant century and carried his bat for 130 runs seen in action pulls Carr, England bowler (not in picture) being watched by the wicket-keeper SPOONER during the fifth cricket test match between India and England at Madras Cricket Club Ground, Madras on February 09, 1952. India won the match. (Published in The Hindu on February 10, 1952) PHOTO: THE HINDU ARCHIVES