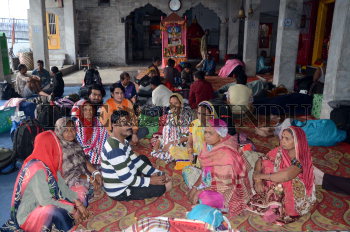 Caption : SRINAGAR, JAMMU AND KASHMIR, 11/07/2016: Stranded Amarnath Yatra pilgrims inside a temple during a curfew in Srinagar on July 11, 2016. With protests and violence continuing in Kashmir, several hundreds of Amarnath Yatra pilgrims from Karnataka are stranded in that State. At least 300 people from Karnataka have been identified as being stuck in Kashmir, following the violence that also saw the suspension of the yatra. Photo: Nissar Ahmad