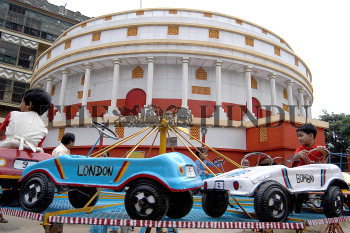 Caption : Children enjoying a ride on merry-go-around cars in front of a Durga Puja pandal which resembles the Indian Parliament House, during the ongoing Durga Puja festival in Kolkata, the capital of the eastern Indian State of West Bengal, on October 3, 2003. Photo: Parth Sanyal