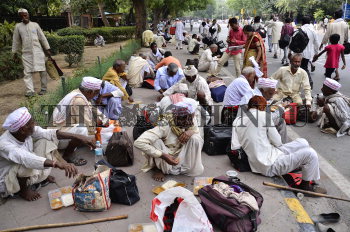 Caption : NEW DELHI, 26/06/2016: Members of Loktantra Senani (Emergency prisoners, in 1975), having their food after the end of a conference organised by Loktantra Senani Kalyan Parisad, at Rafi Marg in New Delhi on Sunday. Photo: Shiv Kumar Pushpakar