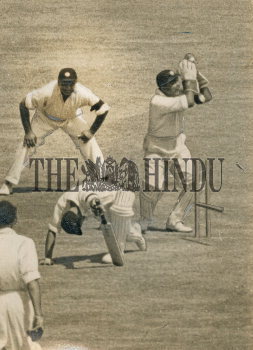 Caption : India's wicketkeeper P.K. Sen, STUMPING Hilton off Mankad. He had a very good match, having claimed 5 victims, on the second day of the Fifth Test cricket match between India and MCC at Madras on February 08, 1952. Amarnath is in the slips. (Published in Sport And Pastime on February 23, 1952) PHOTO: THE HINDU ARCHIVES