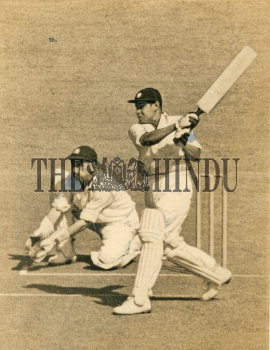 Caption : Pankaj Roy, Indian cricket player drives England bowler Leadbeater (not in picture) during his innings of 140 runs being watched by the wicket-keeper Spooner during the second test match between India and England at Brabourne Stadium, Bombay on December 14, 1951. PHOTO: THE HINDU ARCHIVES