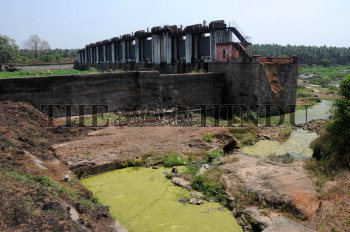 Caption : PALAKKAD, KERALA, 15/06/2016: A view of the breached Moolathara dam and regulator-cum-bridge in Chittur taluk in Palakkad district. The tendering process of the Rs 50 crore repair work of the Moolathara regulator –cum-bridge was completed on last week and the construction works will start in August. The dam had breached on November 8, 2009. The new structure will have six more shutters in addition to the existing 16 shutters to regulate water during flash floods. The absence of enough shutters to release water was the main reason for the breach of the regulator. The work will completed in a period of two year's . The government has given administrative sanction for Rs 49.8 crore, aacccording to the irrigation department. Photo: K. K. Mustafah