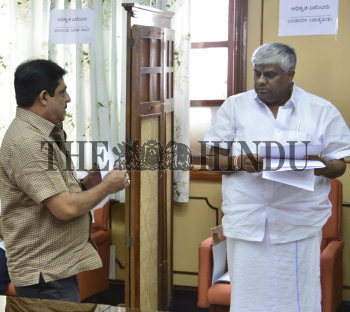 Caption : KARNATAKA - BENGALURU - 11/06/2016 : Legislators of the faction-ridden Janata Dal (S) arriving to cast their votes, during Polling for the four Rajya Sabha seats from Karnataka, by the members of Karnataka Legislative assembly, 2016, at Vidhana Soudha, in Bengaluru on June 11, 2016. Photo: K. Murali Kumar.