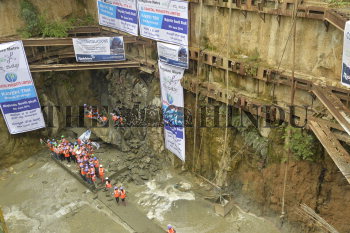 Caption : KARNATAKA - BENGALURU - 08/06/2016 : Namma Metro workers celebrating the breakthrough of tunnel boring machine (TBM) Kaveri at Majestic, inter-change station, after tunnelling between Chikpete and Kempegowda station, on Namma metro Green line on North-South corridor, completing the link between the northern Reaches 3, 3A and 3B with the southern Reach 4 and 4A., by Bangalore Metro Rail Corporation Ltd. (BMRCL), in Bengaluru on June 08, 2016. BMRCL officials said that the track laying work is expected to be completed in two months’ time after which trials will begin in mid-September.   Photo: K. Murali Kumar.