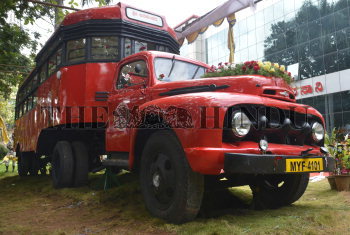 Caption : Karnataka, Bengaluru: 06/06/2016: A reconditioned old bus kept infront of KSRTC head office in Bengaluru on June 06, 2016. History of the bus - Body Built by Brond Ford Coach Body Limited, Canada. The Tractor of the vehicle is BEDFORD make with modified PERKINS P6 engine fitted. The Vehicle become the property of MGRTD after the reorgranisation of States in 1956. The Bus was in use in Vijayapura (Bijapur) Division from 1947, The Body of the vehicle was later reconditioned and put to use in 1968. Later the vehicle was withdrawn from operation as a passenger vehicle and was used as a special vehicle to carry the staff mainly drawn for the fair operations at Banashankari and Savadatti in Northern Karnataka. Hence named as "BANASHANKARI". Photo : K. Bhagya Prakash.