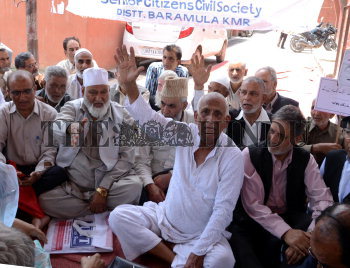 Caption : SRINAGAR, JAMMU AND KASHMIR, 04/06/2016: All J&k Pensioners Welfare Association state President Sampath Prakash along with other member during a one day hunger strike against state government to set up satellite townships for displaced Kashmiri Pandits and Sainik (Security forces ) colony, which they term a design to settle non-state subjects to change the demography Srinagar on June 04, 2016. Photo: Nissar Ahmad