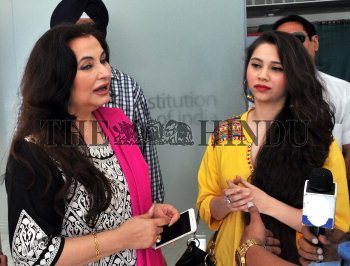 Caption : NEW DELHI, 30/05/2016: Salma Agha (left), Pakistani British singer and actress of Pakistani origin who sang as well as acted in Indian films in the 1980s and the early 1990s, with her daughter at a seminar on "India-Pakistan Relations", Promoting people to people friendship, organised by Delhi Study Group, in New Delhi on Monday. Photo: Shanker Chakravarty