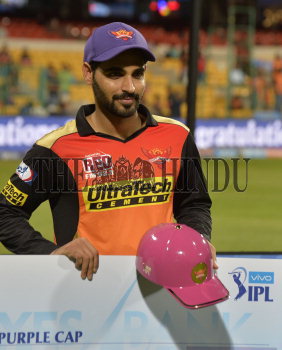 Caption : BENGALURU, KARNATAKA, 29/05/2016: Sunrisers Hyderabad's Bhuvneshwar Kumar poses with the Purple cap (awarded for taking more number of wickets in IPL 2016) and the prize money at the presentation ceremony after the Indian Premier League (IPL) Twenty20 cricket championship 2016 final, which the Sunrisers Hyderabad won, at the M. Chinnaswamy Stadium (KSCA) in Bengaluru on May 29, 2016. Photo: K. Bhagya Prakash