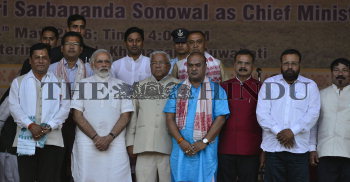 Caption : GUWAHATI, ASSAM, 24/05/2016: Prime Minister of India Narendra Modi, Assam Chief Minister Sarbananda Sonowal and Governor of Assam P B Acharya along with the new ministers at the swearing-in ceremony in Guwahati on May 24, 2016. Ten ministers sworn-in along with Assam's new Chief Minister Sarbananda Sonowal as Assam gets its first BJP government. Photo: Ritu Raj Konwar