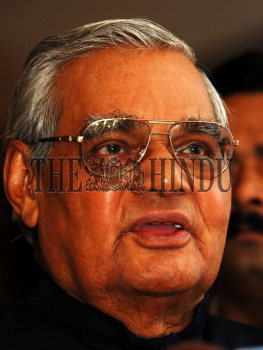 Caption : The Prime Minister, A.B. Vajpayee, addressing the media in New Delhi on Sunday, September 28, 2003, shortly after arriving from Zurich at the end of his 13-day tour during which he visited Turkey and addressed the United Nations General Assembly in New York, USA. Photo: V.V. Krishnan