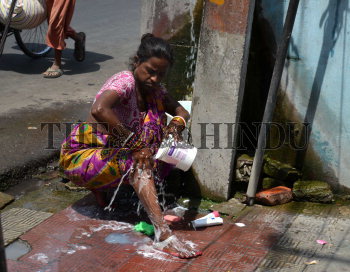 Caption : LUCKNOW, UTTAR PRADESH, 08/05/2016: A worker who lives in the JJ cluster, bathing on the street in absence of washroom in their shanties in Lucknow, on May 8, 2016. Despite more than a decade of robust economic expansion, 60 percent of the country's 1.2 billion people live in poverty on less than $2 a day. Photo: Rajeev Bhatt