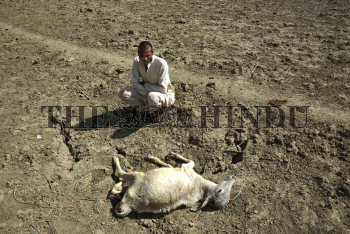 Caption : BUNDELKHAND, UTTAR PRADESH, 03/05/2016: BUNDELKHAND DROUGHT: This farmer lost his calf at Kapsa village in district Hamirpur of drought-hit Bundelkhand area in Uttar Pradesh. Due to the acute water crisis and extreme heat condition, farmers did not dare to grow CROPS in the region. Hundreds of animals died because of lack of natural lakes and wells. The farmers have little choice but to let them loose on the streets as they cannot afford them any longer. Most of them say that while they have become habituated to drought, having faced it repeatedly over the last decade, this year can be counted as the toughest. The reason is that, while in earlier times, the drought meant indebtedness, this year they are struggling for food and water. Photo: Rajeev Bhatt