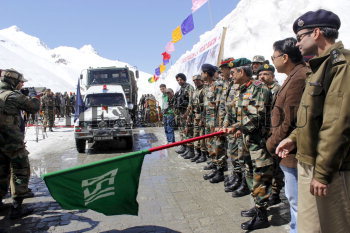 Caption : SRINAGAR, JAMMU AND KASHMIR, 30/04/2016: GOC 15 Corps Satish Dua along with other officers waves a flag as the 434 km long Srinagar- Leh highway was reopened at Zojila pass 108 kilometers (67 miles) east of Srinagar on April 30, 2016. Srinagar-Leh road link was thrown open for vehicular traffic after around five months. The 434-kilometers-long road was closed following the heavy snowfall in December. The Border Roads Organisation (BRO) which maintains the road opened it after clearing the snow from Zojila Pass, 3630 meters above sea level. Photo: Nissar Ahmad