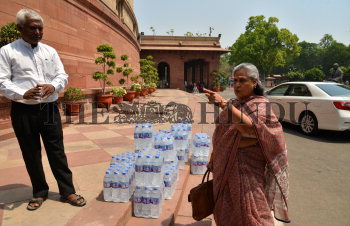 Caption : NEW DELHI, 29/04/2016: SP Rajya Sabha MP Jaya Bachchan seen instructing the caretaker not to keep the the water bottles in the sun and rather take them inside, while arriving at the Parliament House in New Delhi on April 29, 2016. Photo: R.V. Moorthy