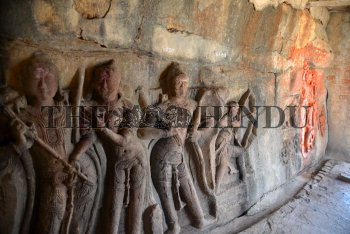 Caption : BUNDELKHAND, UTTAR PRADESH, 27/04/2016: KALINJER FORT BUNDELKHAND: Historian says, Kalinjer fort was built during 150 to 250 CE by Bargujar Kings who had very creative imagination, highly developed aesthetic sense and religious fervor. They were great devotees of Lord Shiva. The massive rock cut sculptures include figures of various gods and goddesses from ancient mythological themes. Fort contains Shiva temple of Neelkanth Mahadev. Its historical background is replete with numerous battles and invasions. It served several of Bundelkhand's ruling dynasties, including the Chandela dynasty of Rajputs in the 10th century who ruled it for pretty longer period. Mughal invader Babur was the only commander in history to have captured the fort in 1526 when driving away Raja Hasan Khan Mewattpati. Shershah Suri, who had dethroned Mughals and was trying to capture central India had almost captured this fort but died accidentally here in 1545. Kalinjar played a prominent part in history down to the time of the Revolt of 1857, when it was held by a small British garrison. Photo: Rajeev Bhatt