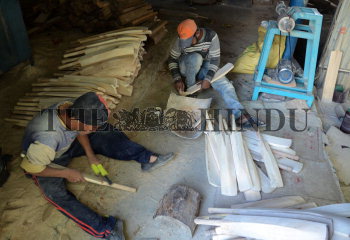 Caption : SRINAGAR, JAMMU AND KASHMIR, 27/04/2016: Kashmiri craftsmen make cricket bats from willow at a workshop in the village of Bijbehara south of 75 kms from Srinagar. Kashmir in which willow trees thrive has an established cricket bat industry which is expecting a boost in sales both nationally and internationally. The demand for cricket bats sees and upward trend during the Indian Premier league (IPL) which is being played at different venues across the country the sale of a cricket bat is much much higher when India clashes with Pakistan on a cricket field anywhere in the world. Photo: Nissar Ahmad