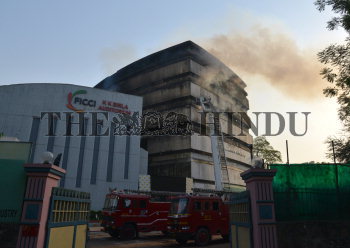 Caption : NEW DELHI, 26/04/2016: Fire Personnel trying to douse the fire, which broke out at the National Museum of Natural History at Mandi House in New Delhi on April 26, 2016. Photo: R.V. Moorthy