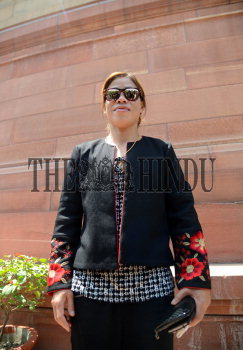 Caption : NEW DELHI, 25/04/2016: Mary Kom who has been nominated to Rajya Sabha arriving on the first day of the second half of the Budget session of Parliament, in New Delhi on April 25, 2016. Photo: Sandeep Saxena