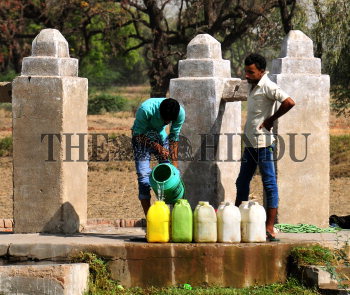 Caption : LUCKNOW, UTTAR PRADESH, 24/04/2016: PECULIAR SOCIAL PROBLEM: Men filling drinking water from a well near Pahadiwali Mata Mandir about 2kms from village Kapsa which is the sole source of drinking water in Hamirpur district of drought-hit Bundelkhand area in Uttar Pradesh on April 24, 2016. Because of lack of drinking water in Kapsa, and normally women do walk up to this well to fetch water, Parents are reluctant to get their daughters married to the boys from this village resulting large numbers of unmarried men. Photo: Rajeev Bhatt