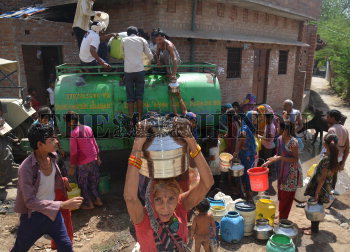 Caption : BUNDELKHAND, UTTAR PRADESH, 23/04/2016: Villagers filling drinking water from a water tank at Kapsa village in Hamirpur district of drought-hit Bundelkhand area in Uttar Pradesh on April 23, 2016. Villagers recycle bathing water to wash their clothes due to the acute water crisis in the region. Hundreds of animals died because of lack of natural lakes and wells amidst extreme heat condition. Photo: Rajeev Bhatt