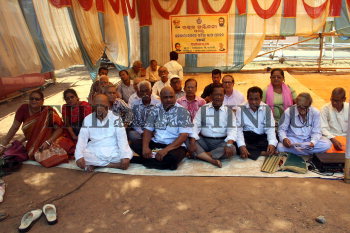 Caption : BHUBANESWAR, ODISHA, 23.04.2016: Members of Utkal Sammilani, the oldest organisation working for consolidation of Odisha after its formation in 1936, staging a dharna in front of the Assembly demanding Odiya be the official language used by the Government, in Bhubaneswar on April 23, 2016. Photo: Lingaraj Panda