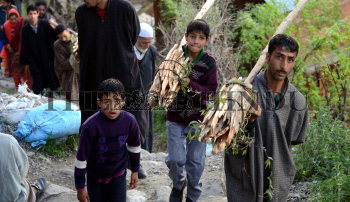 Caption : SRINAGAR, JAMMU AND KASHMIR, 22/04/2016: Kashmiri Muslims hold torches aloft during the annual Aishmuqaam festival at the shrine of Sufi saint Zain-ud-din Wali in Aishmuqaam, some 75 kms (47 miles) south of Srinagar on April 22, 2016. The farming community in Kashmir celebrates the 'festival of lights', carrying torches and offering prayers, marking the end of winter and the beginning of the agricultural season. Photo: Nissar Ahmed