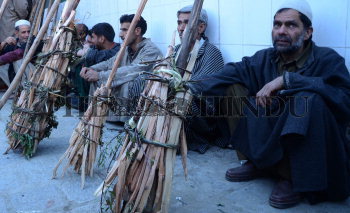 Caption : SRINAGAR, JAMMU AND KASHMIR, 22/04/2016: Kashmiri Muslim villagers wait for the dawn prayers to burn the torches outside the shrine of Sakhi Zain-ud-din Wali, a Sufi saint, for an annual torch festival in Aishmuqam, 75 km south of Srinagar on April 22, 2016. Thousands of Kashmiri Muslims who believe in Sufism thronged to the shrine of Wali to celebrate the annual torch festival which symbolises the end of the long winter and the beginning of the new sowing season. Photo: Nissar Ahmad