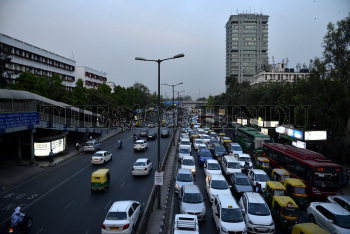 Caption : NEW DELHI, 19/04/2016: Commuters in their vehicles clogging a road during the 5th day of Second Phase of Odd-Even scheme by Delhi Government at a busy traffic intersection of ITO, in New Delhi on Tuesday, April 19, 2016. Photo: Shanker Chakravarty