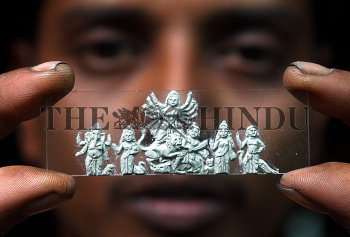 Caption : Picture shows an artist holding his less than 1 inch long and 60 mm wide Durga idol in his Kumartulli studio, in Kolkata. Although the festival witnesses huge idols of Goddess Durga, this artisan wants to get his name in the Guinness Book of World Records for the smallest Durga. He started making tiny idols early this year and now his collection crosses 50 and also has a collection of miniatures that includes Sarat Chandra Chattopapdhyaya, Mahatma Gandhi, Aurobindo, George Bush, Saddam Hussein, and Osama Bin Laden. Photo: Parth Sanyal