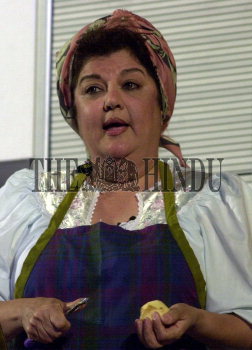 Caption : The flamboyant Mahabanoo Mody - Kotwal, makes the world of theatre sound irresistibly alluring. An actress, director and producer, Mahabanoo has explored various facets of life in theatre and even evolved a stand-up comedy show. "Shirley Valentine" alone has played more than a 100 times, mostly in Mumbai, and still packs an auditorium. In Chennai, to stage "Shirley Valentine" to raise funds for Ability Foundation. Photo: N_Sridharan, September 26, 2003.