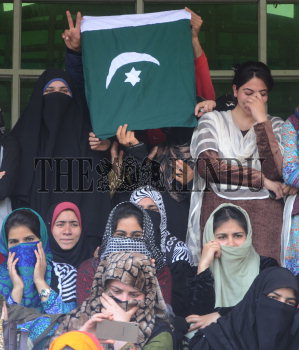 Caption : SRINAGAR, JAMMU AND KASHMIR, 18/04/2016: Students of Kashmir University hold Pakistani flag during a protest demonstration against the recent civilan killings at Handwara and othe places of Kupwara district at kashmir university campus in Srinagar on April 18, 2016. Mobile internet services were restored in Kashmir and authorities lifted restrictions for three hours on movement of people in Handwara and Kupwara towns, which had been rocked by violent protests that left five persons dead since last Tuesday. Photo: Nissar Ahmad