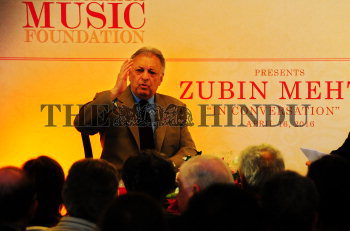 Caption : MUMBAI, MAHARASHTRA, 16/04/2016: The world renowned conductor of Western classical music maestro Zubin Mehta is seen interacting with the connoisseurs of music in Mumbai on April 16, 2014. He is all visiting the city to celebrate his 80th birthday here with his Mehli Mehta Music Foundation presenting a series of three concerts. The Israel Philharmonic Orchestra (IPO) will return to the city after seven years under the baton of Mehta. Mehta turns 80 on April 29. Five internationally acclaimed soloists Pinchas Zuckerman, Denis Matsuev, Amanda Forysth, Maria Katzarava and Andrea Bocelli will perform with the orchestra from April 17 to April 20. The final concert will be an opera gala at the Brabourne Stadium where Bocelli will perform with the Katzarava. Photo: Arunangsu Roy Chowdhury