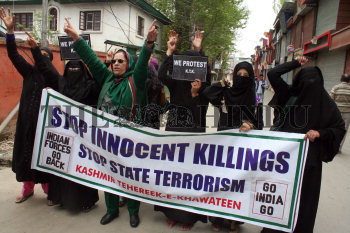 Caption : SRINAGAR, JAMMU AND KASHMIR, 15/04/2016: Police detain Chairperson of Kashmir Tehreek-E- Khawateen Zamrooda Habib during protest in Srinagar on April 15, 2016. Authorities imposed severe restrictions in some areas of Srinagar and curfew in some parts of north Kashmir's Kupwara district to stop a protest lead by the All Parties Hurriyat Conference (APHC) Chairman, Mirwaiz Umar Farooq, against the killing of four civilians, including a woman, by Security forces during a demonstration against the alleged molestation of a school girl in north Kashmir's Handwara region on 12 April 2016. Photo: Nissar Ahmad