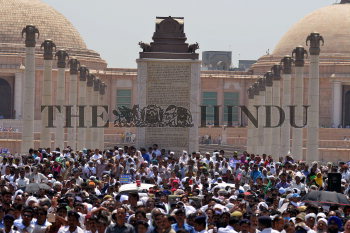 Caption : LUCKNOW, UTTAR PRADESH, 14/04/2016: MAYAWATI ON ELECTION MOOD: Bahujan Samaj Party supporters who assembled in tens of thousands in number to listen to their leader, Mayawati on the occasion of 125th birth anniversary of Baba saheb Dr. Bhimrao Ambedkar at Ambedkar park in Lucknow on April 14, 2016. Photo: Rajeev Bhatt