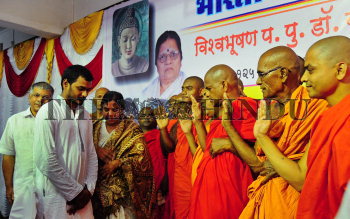 Caption : MUMBAI, MAHARASHTRA, 14/04/2016: To protest against the humiliation AND dejection from Brahminical society, Rohith Vemula’s mother Radhika AND brother Chiatanya Raja Vemula chose to become BUDDHIST on the Birth anniversary of Babasaheb Ambedkar at his ancestral house in Dadar, Mumbai on April 14, 2016. Babasaheb also had converted himself to BUDDHISM inspiring a movement. Radhika AND Chaitanya are being greeted by the BUDDHIST Monks after the conversion ceremony. Photo: Arunangsu Roy Chowdhury